About two weeks ago, I was on my way home from another trip through Saint Louis. Last year, about that same time, I was on the first of several trips through Saint Louis that I would make in the following twelve months. That first trip was also a short time after the killing of Michael Brown in the suburb of Ferguson; the nightly demonstrations were still occurring. This time, as I passed through Saint Louis, it was around the anniversary of that event, which was bringing fresh attention to the events of last August and all that has happened in between.

It was also about two months since my previous trip through Saint Louis. On June 17th, my daughter and I were flying back from the registration and orientation event at her college. In the airport that night, I caught the news of the shooting at “Mother” Emanuel AME Church in Charleston, South Carolina.

Traveling through this area brings these events back to mind for me.   This Sunday will also be a day for Confession, Repentance, and Commitment to End Racism for the ELCA in solidarity with the AME Church.  Now seems as good of a time as any to post these thoughts that have been bouncing around in my head …

Stay off the “me-too” bandwagon

In the immediate aftermath of the Charleston tragedy, a number of white commentators suggested that we couldn’t be certain of the shooter’s motives or mental state. Race might not have anything to do with this, they cautioned. Indeed, this might have been an attack on Christians in general rather than a black church group in particular. Maybe we’re all at risk, all victims (at least potential victims) here.

It’s a tempting line of reasoning. A church was attacked … perhaps for no other reason than it was a gathering of Christian believers. That being the case, all Christian communities could be at risk from similar violence. Certainly black lives do matter … but that’s simply because all lives matter. After all, we wouldn’t want to leave any one out or exclude anyone.

That drive toward inclusion also expands the circle of victims beyond the nine people murdered in the church and their family members grieving these heartbreaking losses. At the arraignment hearing for Dylann Roof, the judge explained there were two sets of victims in this case: the clear victims who were shot and their families who must live with the loss – and also, the family of Dylann Roof.

Why expand the circle of victims to the Roof family? No doubt the parents of young Mr. Roof are shocked that a child they nurtured and raised could do such a thing; any decent parent worthy of being identified as such would be shocked and horrified. The private pain and public humiliation they are feeling is surely unimaginable. In some very real ways they have been harmed by their son’s action. But are they victims on equal footing with those he killed and the other family members and friends who are left to mourn such tragic losses?

Let’s not obscure the realities of the situation: a young white man shot nine black people in the sanctuary (which means safety) of their church building, their spiritual home. By his own admission, Dylann Roof did this because they were black. Plenty of evidence of his racist attitudes surfaced within days of the shooting. We are not all victims in this; we are not all at equal risk from people like Roof – who are all too common.

Speaking of Churches, what of faith formation?

When Dylann Roof was named as a suspect and arrested, the pastor of his family’s church was present with his parents. Not much has come to light about the Roof family’s actual involvement with their local ELCA congregation. However, the presence of the pastor at a time like this suggests active membership and some level of regular participation in the congregation. (People who are marginally affiliated with a congregation generally do not think to contact a pastor at such times.) Even less is known of Dylann’s recent involvement in this or any other congregation. But what we do know indicates that Dylann was reared within the congregation and almost certainly went through the catechetical process in preparation for confirmation (or affirmation of baptism).

And somehow, despite that, by the age of 20, Dylann Roof embraced white supremacist views that contradict what he should have learned in the congregation.

The Roof family happens to belong to a congregation of the ELCA, the Evangelical Lutheran Church in America. But I don’t think this outcome is exclusive to the ELCA. Something like this could – and likely does – happen in most any Christian denomination. An outcome as horrific as this should give all of us pause about faith formation, especially with our children and youth. How can we nurture an understanding of God’s love for all people and all creation that is so clear and so strong that the ideology which ultimately guided Dylann becomes, literally, unthinkable?

About the Confederate Flag … Can We Talk?

By this point, the Confederate Battle Flag has been removed from the South Carolina capitol grounds … something that was unimaginable in Charleston at the beginning of this year. Discussions over the appropriateness of such displays of this battle flag have been political fodder for decades. Now there has been an almost allergic reaction to the old Stars and Bars. But uncritical, wholesale rejection may be just as problematic as the defensiveness that previously swirled around the battle flag as a historical artifact.

Yes, the flag was originally created to rally the Confederate troops during the Civil War. Then, once the war ended, the rebel battle flag faded from view along with the cause it represented. These historic displays of the Confederate Flag only go back some fifty years or so. The old flag was revived to serve as symbol of resistance to the Civil Rights movement and the legislation it produced. 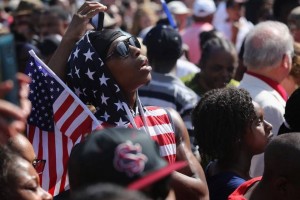 Any honest conversation about that flag and its symbolism needs to address this point. To gloss over it … ignore it … stuff it away without addressing the actual reasons why the flag was being displayed where it was will waste a real opportunity to assess how much farther we really have to go in living out those words of the Pledge of Allegiance (to the American Flag) – those words about liberty and justice for all.

To seek justice and to love mercy …

Many sat up and took notice at Dylann Roof’s arraignment as a number of the survivors expressed forgiveness and mercy to the young man who murdered their loved ones. Was it genuine? Was it too soon to speak of forgiveness? Did that mean the matter was settled?

Our culture has a very shallow, perhaps even cheap, sense of what the word forgiveness means. “It’s no big deal.” “It’s not a problem.” “Just forget about it.” These are things we say to communicate something akin to forgiveness … but I’m not sure they communicate actual forgiveness. We want to equate forgiveness with forgetting and moving on, as though whatever hurtful thing happened didn’t actually happen.

What has happen can never not have happened. There will be no future in which the hurtful experience is no longer a part of the past. Forgiveness doesn’t mean forgetting or pretending that what happened never happened. As Rev. Dr. Martin Luther King put it, forgiveness means not allowing a past bad action to be a barrier to future relationship.

For the brave survivors of Mother Emanuel, I suspect the words they spoke about forgiveness, love, and mercy were less about how they actually felt in that moment as they were expressions of their intentions for how they would move forward. They spoke bluntly and openly of their grief and how much the losses hurt. That language was direct and powerful. Not one among them asked that Dylann Roof be released or the charges be dismissed. They all clearly expect the trial process to go forward toward a guilty verdict for Roof. Justice will yet be served – as it ought to be.

This has all faded from memory fairly quickly as other tragic, high-profile acts of gun violence have happened again and again these past two months. Perhaps we may have forgotten that as Dylann Roof was being arraigned for his attack, Dzhokhar Tsarnaev was being sentenced to death for his role in the bombing at the finish line for the Boston Marathon in 2013. Not all of those who testified, to be sure, but most of those who spoke did so with anger, hatred, and contempt for Tsarnaev. It was all perfectly understandable.

But contrast these statements with the words of the victims and survivors of the shooting at Mother Emanuel had to say to Roof. Which people would we really rather be like?

If we let them, the survivors from Mother Emanuel have much to teach us.

If the brutal killings of 26 children and teachers at Sandy Hook Elementary weren’t enough to move our culture forward on sensible actions to reduce gun violence, the killings of nine people in their church won’t either. Indeed, in the aftermath of Charleston, the same stupid suggestion was made that more guns are the solution. After Sandy Hook, there were calls to arm teachers and school staff. After Charleston, there were suggestions that churches should consider armed security. Isn’t such a suggestion completely antithetical to the task of the church to be a demonstration of life in the Reign and Realm of God?

If you’re not easily offended, read and consider this …

… And then ask this question: Who profits by selling this nonsense?

The problem is too many guns are too easily accessible to people who are more likely to use them for harm … who may even regard the harm as a positive, even good, action. When I was learning to drive, I was told that the car is as dangerous as any weapon. Our society readily requires training and testing and insuring and licensing in preparation for driving a car. But driving is a privilege while gun ownership is regarded as a right. However, does that difference mean we can’t have any meaningful training, testing, licensing, and maybe even insuring as part of gun ownership? Why not? We the People – we make the rules. Survey upon survey shows the majority does want better background checks and other steps that can reduce gun violence. So can we take those steps now … after Charleston … after the many episodes of similar violence that have happened in the two months since then?

But if not now, when will it be enough?